I really am random with my posting topics, aren’t I. Manly soldiers and jailbaiting lolis on one page.

“What made Ghost Recon one of the greatest shooters of all times was the fact that you were a soldier. The fact that you can jump between your soldiers meant that none of them stand out; your entire hand-picked squad was equally special. This feeling of being a faceless grunt but also something of a veteran leader was very unique, and I have yet to play a game that has replicated this feel. […] Ghost Recon constantly reminds you that you are not ‘better’; you are a regular guy, even if your command the squad. It’s not your job to get medals (though you do get quite a few of them) but to do missions and keep your mates alive.”

EDIT: I drafted this back when the game just came out. Don’t ask me why I’ve never posted it.

You can’t break a man the way you break a dog, or a horse. The harder you beat a man, the taller he stands. To break a man’s will, to break his spirit, you have to break his mind. Men have this idea that there’s a way to fight with dignity, that there’s a proper way to kill someone. It’s absurd, it’s anesthetic. We need it to endure the bloody horror of murder. You must destroy that idea. Show him what a messy, terrible thing it is to kill a man, and then show him that you relish in it.

END_OF_DOCUMENT_TOKEN_TO_BE_REPLACED

Posted by CanonRap in Gaming on January 1, 2009 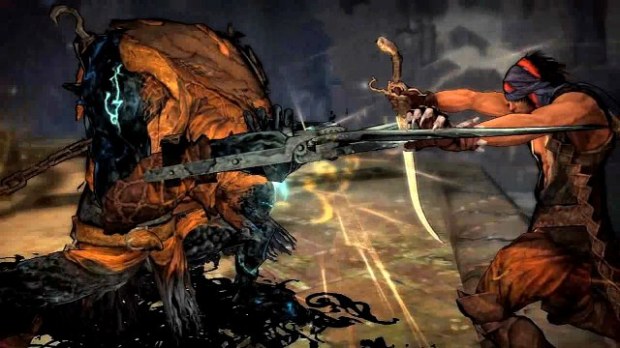 Random screencap from trailer, because I can’t be buggered to launch the game just for a single screenshot. The Hunter (left) is pretty awesome, though.

The new Prince of Persia isn’t too bad – though why they marketed it as a reboot of Sands of Time when there’s nothing in common except a whole lotta wall-running – but plagued by pure idiocy in terms of game design. Did Ubisoft Montreal recently fire all their game testers and the entire QC staff? Because that would be one of two things that would explain this inconsistency, the other (already aforementioned) being that their workers are utter morons.

Did they honestly believe that having a sparkly woosh effect a whole second long between every menu change wouldn’t get annoying after the hundredth time?

Was the PC development team inebriated throughout the entire creation process?

And to the designer(s) of the combat system… it’s actually decent, though (again) awkward, because the back-and-forth swordfights are so inconsistent. Let’s not even mention how disjointed the action and the platforming are…

Sony opens the PS2 platform
Aside from the PS2’s age, perhaps PS3 sales aren’t quite reaching Sony’s expectations? Personally, if the PS2’s price drops any lower, I might just think about picking one up (like, half a decade late). If only for Fate/unlimited codes.

New Elder Scrolls in 2010 (tentative)
I really like the Elder Scrolls games – note the link to Mr. Livingston’s Oblivion blog on the right (layout got changed) – even though they’re rarely released in a state that ensures good long-term gameplay without several dozen mods on your load-list. Comparatively, Oblivion and Morrowind were pretty much equal; Oblivion takes less time to get boring, but Morrowind is more broken and less intuitive in general. Hopefully, Bethesda will take a hint from Ubisoft* and churn out a Elder Scrolls V that combines the best of the previous games.

* “…take a hint from Ubisoft.” Wow. I’m not going to be repeating that any time soon.

Darker and Edgier
Create a free website or blog at WordPress.com.